Articles by Paul A. Offit, MD

When Dr. Paul A. Offit published “Autism’s False Prophets” in 2008, he elected to skip the usual round of book signings. His defense of childhood vaccinations so enraged some people who consider them a cause of autism that he was getting credible death threats. 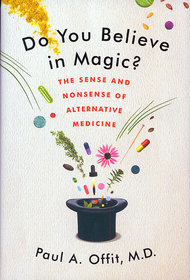 Others might have chosen to flee the public arena after that, but not Dr. Offit, the chief of infectious diseases at Children’s Hospital of Philadelphia, whose appetite for the good fight seems only to have grown. Over the last decade he has become a leading debunker of mass misconceptions surrounding infections and vaccines, and now he is taking on the entire field of alternative medicine, from acupuncture to vitamins.

This territory is not all that far from his usual stomping grounds; some of vaccination’s rabid opponents are enthusiastic supporters of unconventional medical interventions. Nor has Dr. Offit’s own stance changed: He speaks for rational, scientific medicine (and medicines) whose efficacy has been confirmed in impartial, reproducible clinical trials. Everything else, no matter how venerable, highly recommended or self-evidently 100 percent terrific, he places on the spectrum between unproved and dangerous…..

Dr. Paul Offit doesn’t like getting threats. But the 62-year-old pediatrician at Children’s Hospital of Philadelphia says it goes with the territory when taking on powerful industries and interest groups whose beliefs are deeply rooted in emotion.

He’s ready for a tsunami of criticism with his latest foray into debunking popular wisdom – “Do You Believe in Magic?: The Sense and Nonsense of Alternative Medicine” in which he takes on the vitamin and herbal supplements industry, alternative medicine of all kinds, Congress and celebrity doctors who peddle their own products. It hits the shelves on Tuesday.

“Yes, I do get hate mail,” Offit admits. He makes the case that the vitamin industry in particular has successfully lobbied to keep itself unregulated while selling billions of pills to an eager and gullible public. “People think of dietary supplements as natural, benign and helpful,” Offit told NBC News. “People don’t think of them as drugs.”

Yet studies have shown that not only do vitamin supplements fail to lower cancer risk, but they can actually cause cancer – most notably the 1994 Finnish study that found smokers who took beta carotene – which the body converts to vitamin A – actually had a higher risk of lung cancer than men who didn’t take the supplements. Alternative therapies of all kinds are often not only of no benefit whatsoever — they can be harmful, he notes….

Editor’s note: Dr. Paul Offit is chief of the division of infectious diseases at the Children’s Hospital of Philadelphia and author of the book “Do You Believe in Magic? The Sense and Nonsense of Alternative Medicine.” He previously has taken on the anti-vaccine movement.

And it has moved into the mainstream. Hospitals now have dietary supplements on their formularies (list of stocked medications); offer reiki masters to cancer patients; or teach medical students how to manipulate healing energies.

Forty-two percent of hospitals offered some form of alternative therapies to their patients, according to a 2010 survey of 5,800 facilities. When asked why, almost all responded “patient demand.”

In an interview with Dr. Mehmet Oz, actress Gwyneth Paltrow defended her decision to put her children on a no-dairy, low-carb, gluten-free diet to treat her son’s eczema, a skin disease, “naturally.”

“I try at home to make everything gluten-free for him because the difference in his comfort is unbelievable when he’s sticking to what he’s meant to be eating,” she told the doctor host.

Her beliefs — she also claims that she successfully treated her panic attacks, inflammation, and thyroid problems with diet — based on controversial food-sensitivity testing were lambasted by scientists and physicians as being without scientific merit. Maclean’s science blog called her a “purveyor of quack remedies.”

Still, she’s successfully marketed her lifestyle in the form of a bestselling cookbook called “It’s All Good.”

“[Paltrow] is saying natural is ‘all good.’ But that’s not true,” explains Dr. Paul A. Offit, author of the book “Do You Believe in Magic?” (Harper), a damning takedown of the alternative-medicine industry. “This is largely unregulated industry, and we aren’t told about many of the negative effects. We wade in without a lot of knowledge.”….

In 1992, with an initial budget of $2 million, Congress created the Office of Alternative Medicine (OAM). Based on legislation sponsored by Iowa politicians Tom Harkin and Berkeley Bedell, OAM’s mission was “to explore complementary and alternative healing practices in the context of rigorous science.”

For example, Senate Bill 20 makes it clear that any adult who “causes serious bodily injury,” either by “kicking, biting, stabbing, cutting, or throwing a child,” or “forcefully shakes or slaps a child under one year of age,” or “causes serious physical neglect,” or “causes a child to be near a methamphetamine lab,” or “operates a vehicle in which a child is a passenger while driving under the influence of alcohol,” has committed child abuse…

Although America is the most medically advanced place in the world, many people disregard modern medicine in favor of using their faith to fight life-threatening illnesses. In twenty-first century America, how could this be happening? Read more

Every week, Paul will be writing commentary at The Daily Beast. You can read the latest piece as well as previous articles on their website. Read the articles

About Paul A. Offit, MD

Paul Offit is the Director of the Vaccine Education Center at the Children’s Hospital of Philadelphia.